When I’m trying to decide between two products, I love seeing a head-to-head comparison between the two. I’m always trying to see how one product stacks up against the other because, in the end, I want to get the most for my money.

I’m starting to tackle upgrading the lighting in my garage, so I wanted to test out a few of the most popular LED shop lights.

In all the reviews I found online, I kept hearing one name over and over again: Hyperikon.

So I had to check them out.

Hyperikon is a US company that started back in 2010 by two brothers selling LED lights door-to-door. They joined Amazon a few years later and have been making a big splash ever since.

There are a few notable YouTube influencers that swear by their LED tube lights, so I did some research on their stuff. I have to say, they’re pretty impressive.

For my needs, I wanted to look at two of their most popular LED shop lights to see which was better.

I’m going to go over each briefly, then talk about what they have in common, what some of the differences are. Finally, I’m going to put one of each up in my garage and see how they look.

I’m a huge fan of clean, minimalist designs that have a classic look and this light fixture absolutely nails it!

The housing is a slim 2.8 inches wide and a hair under 2″ high, but still manages to hold two LED strip lights that produce a whopping 4580 lumens. It’s a touch shorter than a normal 4′ fixture, measuring at 46.4 inches long.

The housing is made of 18-gauge metal with a brushed satin finish. In a world full of white painted metal fixtures, this one really stands out.

I know it’s just a light fixture, and nobody but me will ever notice, but it’s a simple thing that makes the light look a lot more expensive than it is.

There are four different versions of the same fixture:

I opted for the 4C-50S, so I got the full daylight, 5000 degree Kelvin color temperature light flowing through clear bulbs. For more on that color temperature you should get for your garage, check out my article here.

There’s a short delay of about two seconds for the lights to turn on, but they don’t need to warm up. As soon as they’re on, they’re on at full brightness.

The same brackets are used in both cases. The support cables are adjustable so you can set the height anywhere up to 46″ from the ceiling.

There are a couple of things that I’d change if I had my way though.

First, the lights aren’t linkable to each other. Each fixture has to be wired up individually. You can’t hardwire them without some extensive modifications.

The cord has a power switch midway through which is a great feature if you’re using this as a workbench light. If you’re wiring them all to the ceiling like I am, the switch is going to be an eyesore. 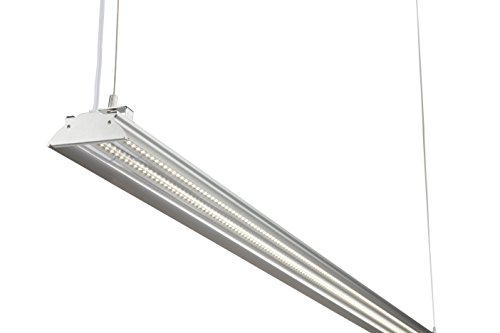 Hyperikon 4FT 4580LM LED Shop Light
$36.95
Buy on Amazon Learn More
We earn a commission if you click this link and make a purchase at no additional cost to you.

I think the best word to describe it is ‘vanilla.’

Not that there’s anything wrong with vanilla, mind you. Personally, I think you can tell a lot about a company by the attention to detail they put into something that’s designed to be basic.

Let’s start with the fixture itself. The housing is a heavier gauge steel, painted in a flat white finish. When I measured, it was slightly thicker than 16 gauge metal, so noticeably thicker than the other Hyperikon LED light that I tested.

There are only two bulb options for this fixture, and they both deal with what color temperature you want.

One thing I did like with this fixture is that there is almost no delay from the time that you turn them on to when the bulbs are at their full brightness.

As with the other Hyperikon LED fixtures, you can install these via both steel cables or directly into the ceiling. The difference with this fixture is the top of the fixtures have dual-purpose holes that can take both the wires and screws.

Seriously, if I’d known adding lights was this easy, I probably would have done it already.

They include a couple of hooks, screws and drywall anchors. Ideally, you’d always mount the LED fixtures into your ceiling joists, but it’s nice that they include an option so you can mount the lights wherever you need them.

The Hyperikon 4F-50T2 is a really solid choice for an LED shop light, so there’s really not much that I’d change.

I’d like there to be an option to hardwire the lights without resorting to splicing wires. If you’re going to upgrade your garage lighting to LED fixtures, you want to have the option to wire them to existing fixtures.

It’s big selling point is that it’s an extremely well-made fixture that does the job with no muss and no fuss. The high-grade steel feels solid and it puts out a ton of light. 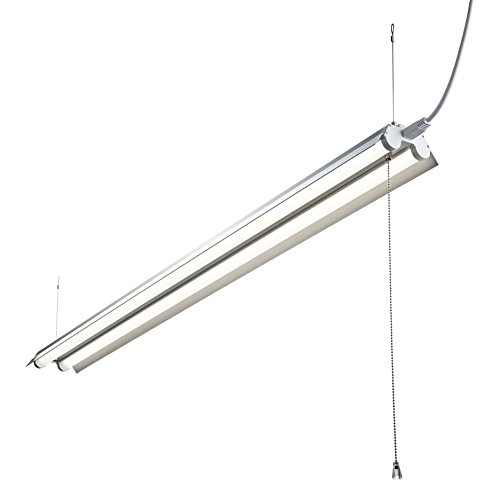 Hyperikon 4 FT 4000LM LED Linkable Shop Lights
$75.99
Buy on Amazon Learn More
We earn a commission if you click this link and make a purchase at no additional cost to you.

Now that we’ve gotten an idea of each Hyperikon LED fixture individually, lets take a look how that compare to each other.

As I mentioned before, there’s a huge size difference between two fixtures themselves.

Take a look at these two pictures.

On the flip side, the bulbs both have a color temperature of 5000 Kelvin, at least in the configurations I bought them. However, the 4F-50T2 has frosted bulbs only, whereas the 4C-50S comes with either frosted or clear bulbs.

Both produce a ton of light, with the clear bulbs being ever-so-slightly higher output.

I’ll admit, it’s very difficult to get a good idea of how much light an LED fixture puts out based on photos alone.

What I will say is that both lights really do a great job of lighting up the room. The frosted bulbs of the 4F-50T2 cast a softer shadow than the clear bulbs of the 4C-50S.

But that’s a factor of the bulbs themselves. Remember, frosted bulbs are available in both LED lights, but the clear bulbs are only available in the 4C-50S.

One major difference is that only the 4F-50T2 is able to be linked to another light. So if you’re looking to string multiple light fixtures together, that may be the route you want to go.

Finally, the price tag. Both fixtures are sitting right at the $30 price point and only a few dollars separate the two. I won’t often say that price shouldn’t be a factor in a purchase, but that’s true in this case.

Alright, I threw a lot at you, so let me break it down for you.

Both are great options and they’re absolutely the best lights I’ve tested so far. You can’t go wrong with either of the Hyperikon LED shop lights, but for my garage, I’m going with the Hyperfixture 4C-50S.