If you haven’t been following along, I’m doing research for my own garage lighting project. I decided to get some hands-on experience as many of the major products and brands as I could.

When I found Hykolity LED shop lights, they seem to check all the boxes I wanted:

On paper they seem to be one of the better options out there, so they definitely warrant a closer look. (Spoiler: One of these lights actually ended up winning!)

I don’t know about you but I really can’t tell if product A is so much better than product B until I have my hands on both of them.

There are two Hykolity LED shop lights that really got me interested. So I decided to do a head-to-head competition to see which one was better.

It’s worth noting that both of these are Hykolitys low-bay LED lights. They also offer high-bay fixtures, but they’re designed for a different application. For more on the difference between high-bay and low-bay lights, check out my article here.

There was a little bit of confusion with my first set of Hykolity LED lights.

The fixture I ordered from Amazon was model number HY-SP4F-4. I’ve listed the specs below, straight from Amazon’s website.

The issue was that the model number that they shipped me was HK-SL4FT42W5K8-1, as you can see in this image.

I reached out to Hykolity support because that kind of discrepancy always raises some flags with me. They were able to verify that it was a genuine Hykolity LED shop light, even though the model numbers weren’t the same.

Evidently Amazon has some stock of their own at the fulfillment center that doesn’t match what’s available on Hykolity.com. For the rest of this article, I’ll list the model number as HY-SP4F-4 to match the specs above.

That’s a win, but don’t expect anything in this price range and design to be rock solid in terms of rigidity.

There’s a two-pronged outlet on the end opposite the (black!) power cable.

It’s important to note that this power plug is NOT controlled by the pull-chain. Once anything is plugged into this outlet, it’s live.

While you can link up top four LED lights together, if you want to turn them on and off all at the same time you’ll need to find a different solution.

As I mentioned, the power cord is black and not white. I’m not sure why companies make a white fixture with a black cord coming out of it. There’s no way to hide the fixtures because the cord stands out like a sore thumb.

That actually transitions perfectly into the bulbs themselves.

Amazon does offer a different model that has a white cord, the HY-SL36-4. However, that model doesn’t output as much light as the HY-SP4F-4. It also appears to be an older version because it’s not listed on Hykolity’s web site.

The HY-SP4F-4 puts out 4200 lumens while using 40 watts of power. That’s 105 lumens per watt of power. There are other lights that are more efficient, but this is respectable.

By comparison, the HY-SL36-4 mentioned earlier only outputs 3600 lumens while using 36 watts of power.

The bulbs themselves are two frosted LED tubes that cannot be removed from the fixtures. Unfortunately, there aren’t any color temperature options. You can’t get these lights in clear bulbs either.

The fixtures can be hung from the included chains or directly mounted to the ceiling using screws – although it’s MUCH easier to hang the lights from the chains.

I decided to mount mine directly to the ceiling, which was a little challenging.

The screws need to be drilled in at 46.67 inches apart. There’s almost no margin for error based on how you mount the fixture to the screws. When you’re standing on a ladder and drilling a pilot hole in the ceiling, it’s easy to be off by a fraction of an inch. That makes all the difference in this case.

Once I got the light mounted correctly, it’s incredibly stable. There’s very little movement when I pull the cord to turn it on and off.

Once the power is turned on, these Hykolity LED fixtures put out a good amount of light.

The frosted bulbs cast softer shadows on anything that gets in the way. You can see some of those shadows in the corners where the wall meets the ceiling, and also coming off my Gladiator cabinets.

There’s only a few things I’m not happy with for these fixtures. Unfortunately, for me personally, one of them is a deal-breaker.

That’s the black power cord. I don’t know about you, but my eye is instantly drawn to that black cord when I see these lights. If I went with these lights, I’d need to cover them with a white wire management cover, and that’s just an extra step that I’m not willing to take.

The other issue is that I’d really like different bulb options – both color temperature and having clear bulbs. I’m heavily leaning toward clear bulbs in my garage. All things being equal, I would need to pick another LED shop light. 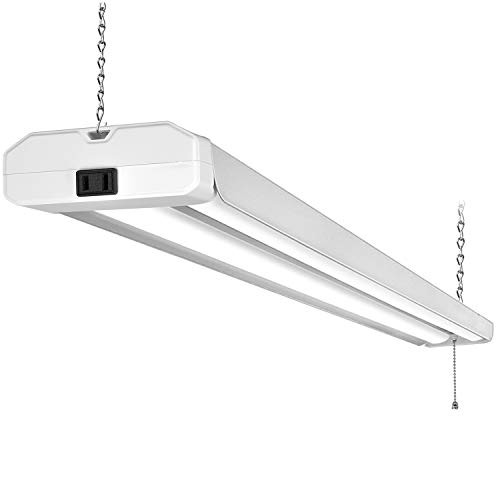 Hykolity 4FT 4200LM LED Shop Light
$29.99
Buy on Amazon Learn More
We earn a commission if you click this link and make a purchase at no additional cost to you.

I got a bit of a surprise when I pulled the Hykolity SL4FT40W5K LED out of the box.

This is a hardwired fixture, which actually works out better for me in the end. I have four recessed LED lights in my garage in addition to the standard center light socket next to my garage door opener.

I should have seen that from the photos on Amazon, but I must have missed it when I bought it.

It’s harder than you might think to find a good quality hardwired LED fixture, so I’d all-but given up. My plan was to pick the best shop light I could find and then cut off the end of the power plug to I could hardwire it.

Finding a really good fixture that happens to also be hardwired is a bonus.

I really like the design of the Hykolity SL4FT40W5K fixture.

At under three inches in both width and height, it’s exactly as big as it needs to be. You won’t find any wasted space here.

The endcaps have two tabs to secure them to the rest of the housing, and further secured by a screw on the bottom. The only reason you’d need to remove them is if you wanted to remove the frosted plastic housing over the bulbs.

On the bottom of the fixture, right in the center is a small cutout for the wiring. This is common in any hardwired LED fixtures so you can mount the light lush to the ceiling.

There’s the standard, white, black and ground wires, but there’s also a second set of wires to use with a dimmer.

Unfortunately, there aren’t really any bulb options for this Hykolity LED fixture either.

The lights are only offered with a color temperature of 5000 Kelvin, and only come with a frosted plastic cover.

However, they do offer the fixtures in both 4′ and 8′ lengths.

I like that there are multiple options if you need longer length fixtures. You can decide if you want to be slightly more energy efficient or as bright as you possibly can be.

I ran some numbers based on how many lumens I needed to light my garage, and came up with a couple of different possibilities. It turns out that I could save about 25% on the total cost just by getting four eight-foot fixtures and changing the layout slightly.

Because they’re hardwired, there’s a little more to installing these Hykolity LED fixtures than the HY-SP4F-4 fixtures we looked a earlier.

It’s a fairly simple process to turn this fixture as a plug-in light. Hunker has a pretty good article that goes through the process. Basically what you need to do is cut off the end of a three-pronged extension cord and splice that to the wires in the fixture.

The next decision to make is whether you want to hang these fixtures from chains or to mount them on the ceiling directly.

My fixture was missing the chains from the packaging, but it wasn’t something I was planning on using anyway.

This is really nitpicky, but I’d include an optional plug end, just in case you wanted to use these as a plug-in light fixture. The lights are already slightly pricey, and I don’t think that would add much in the way of additional costs.

It would be nice to have some additional options for color temperature and a clear lens, but that’s nitpicky as well.

If Hykolity keeping the options to a minimum helps them to keep the cost down, then that’s a trade I’m willing to make every time. 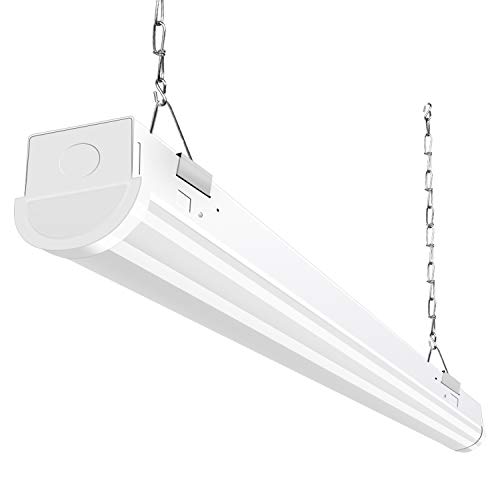 Hykolity 4 FT 5200LM LED Shop Light Buy on Amazon Learn More
We earn a commission if you click this link and make a purchase at no additional cost to you.

This isn’t as easy a comparison as the Hyperikon LED comparison that I wrote earlier. Those lights were at least somewhat similar.

These lights really couldn’t be more different, both in design and in features.

The Hykolity SL4FT40W5K is dwarfed by the larger HY-SP4F-4. I think this next photo says it all. The smaller, newer SL4FT40W5K fits neatly in between the bulbs of the HY-SP4F-4.

In my opinion, this is a big point in favor of the SL4FT40W5K. Lights shouldn’t be any bigger than they absolutely need to. If Hykolity can get the same results (actually better results) from a smaller light fixture, then that’s a huge plus in my book.

These lights are going to appeal to different types of people.

If you’re like me and want to hardwire your garage lighting, then the SL4FT40W5K is the obvious choice. If instead you just want an easy plug-in light that you can install in minutes, the HY-SP4F-4 is the better choice.

Buy the Hykolity HY-SP4F-4 if:

Buy the Hykolity SL4FT40W5K if:

I really like the Hykolity SL4FT40W5K fixtures. They’re versatile LED shop lights with a couple of different options for fixture lengths. I wish that they had some alternatives for color temperature, but that’s a minor gripe.

UPDATE: I ended up choosing the Hykolity 4′ and 8′ hardwired LED fixtures for my garage. If you want to see how I installed them and some really cool before and after pictures of my garage, check out my new article here!

Let me know which one you prefer in the comments below and why.