You are here: Home / Blog / Is This Accessory Compatible With Kobalt K-Rail?
PinterestFacebookTwitterRedditEmail

Welcome to my third installment in the “is this accessory compatible” series. Today we’re going to be looking at the Kobalt K-Rail track system.

If you frequent Lowe’s like I do, you’re no doubt familiar with their Kobalt products.

Kobalt is Lowe’s store brand of tools and accessories. It was created in 1998 to compete with Home Depot’s Husky brand and Sears’ Craftsman brand. Twenty year later in 2018, Lowe’s started selling the Craftsman brand after Sears sold it off.

I won’t speculate too much on what this means for the future of the Kobalt line, but it would give me something additional to think about if I were considering the Kobalt K-Rail.

You can check out the other installments in my “Will this accessory work” series here:

How the experiment works

The theory behind this test is simple.

One of my biggest gripes is that I’m never really sure if the hook or accessory I’m looking at will work with the system i already own. This experiment seemed like a cheap and easy way to figure it out and I hope it’ll help you as well.

What’s more, this test helped me choose what the best track storage system was for my garage.

It’s easy to see how the Kobalt K-Rail got it’s name. If you look at one of the tracks from the side, it makes a very distinctive ‘K’ shape.

The rail itself is made of black textured PVC plastic. There’s a simple white Kobalt logo on the bottom left of each rail, but it’s easy to cover it up or scrape it off if you want a cleaner look.

Installing the Kobalt K-Rail is very similar to installing any other track system. Each rail should be secured to as many wall studs as possible, but not less than two studs.

In my image above, I show the rail secured with a screw in the middle of the rail, but you can also secure it by screws in the top and bottom of the rail. 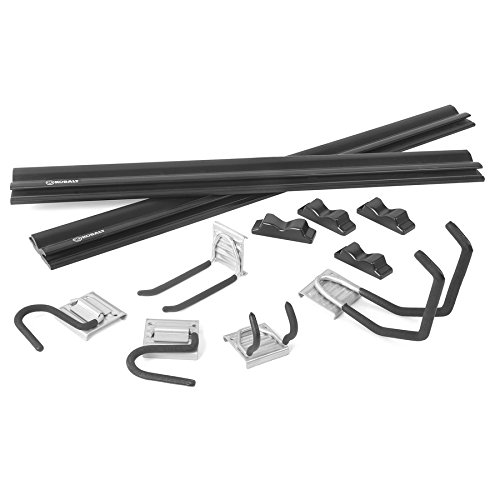 Pin
Kobalt 11-Piece Gray and Black Plastic Storage Rail System
$66.90
Buy on Amazon Learn More
We earn a commission if you click this link and make a purchase at no additional cost to you.

How the Kobalt K-Rail Accessories Are Supposed To Fit

The way the hooks attach to the rail is what makes the Kobalt different from any of the other track systems I’ve tested.

In all of the other wall storage systems the hook provides the friction needed to stick on the track. Usually the tracks themselves are smooth plastic or metal pieces.

Kobalt takes the opposite approach.

The Kobalt K-Rail hook is smooth and fairly streamlined. The rail itself provides the friction needed to keep the hook from sliding around.

You can see in this image below that the Kobalt hook looks very different from the typical ‘C’ channel found in every other track system.

Looking at the bottom of the Kobalt hook, we really see the differences.

There is no upwards curve at all. The hook just seems to rest on the track rather than grip it.

That likely contributes to the Kobalt hook not working on any system other than their own.

The Gladiator GearTrack accessories slide on easily over top of the Kobalt K-Rail, but there’s nothing to secure them on the bottom.

As a result, the Gladiator accessories are incredibly insecure when you put them on the K-Rail. There is a ton of side-to-side motion and I can’t imagine putting any weight on this hook at all.

The Gladiator accessories snap into the GearTrack and channels in two ways: with the usual C-channel design and with the hooks at the top and bottom for additional support.

Since there’s nothing for those hooks to latch on to on the K-Rail system, it’s missing most of the stability.

This is the first test that the Craftsman has failed.

With all of the other systems I’ve tried, the Craftsman accessories are at least somewhat compatible.

Not in this case.

The Craftsman VersaTrack hooks and accessories have one of the most secure and versatile ways of attaching to their channel. First, the top of their hook is an upside-down ‘U’ shape that locks on to the track.

The bottom of the hook has a locking mechanism to give it a little more stability and keep it from moving around under load.

Unfortunately for this test, the lock on the bottom of the Craftsman hook won’t let it slide over the top of the K-Rail channel.

Because of that, the Craftsman VersaTrack accessory fails this test outright.

Compatible with Kobalt K-Rail? No!

If you thought the Craftsman VersaTrack result was bad, wait until you see the Rubbermaid .

The Rubbermaid is obviously not designed for the Kobalt K-Rail system. It barely hangs on, even when the hook isn’t holding any weight.

The C-channel on the top of the Rubbermaid hook is so shallow that it walls off at the slightest vibration or even a fairly strong breeze.

What’s worse, the Rubbermaid hook is too narrow that it can’t slide over the K-Rail’s lower channel.

The Rubbermaid laughably fails this test, so don’t even think about using one of these accessories on your Kobalt K-Rail.

Compatible with Kobalt K-Rail? Definitely not!